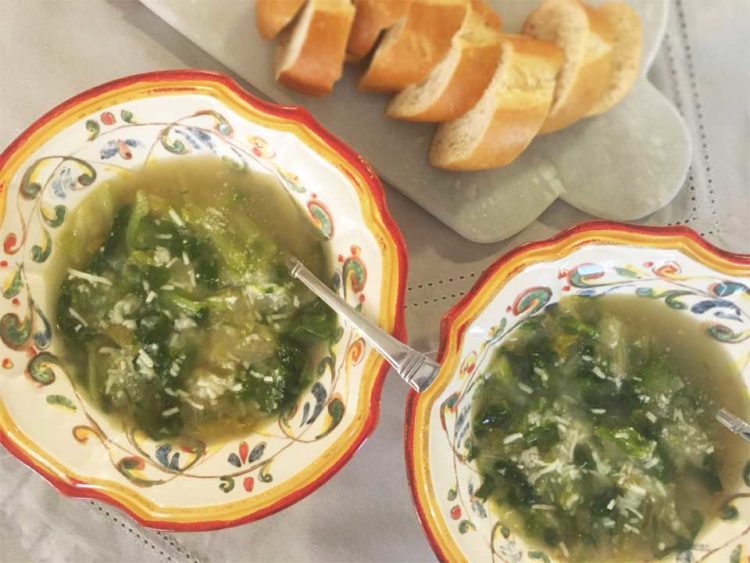 Nannu’s Sicilian Escarole soup is a dish that Joe remembers fondly from his childhood. It is simple yet comforting and very easy to make. Joe’s grandfather made this dish for lunch on a regular basis. Nannu is Sicilian for Grandfather. Sicilian is one of the many different dialects of the Italian language.

Escarole is the main ingredient in this dish. A variety of lettuce is not something most people would think of putting into a soup, but in this case it works very well. The outer leaves of the escarole head tend to be a little tough making them great for soup. You can use the more tender inside leaves for soup or a salad.

Add some chicken broth, to your sautéed onions and escarole and then sprinkle with cheese and you have a classic soup. This soup can serve as a light mid-day meal, likewise it can be eaten as a soup course for dinner.

You can make a good soup using quality store bought chicken broth, but Joe and I like to make our own chicken stock. It is rather quick to make in an Insta Pot. We make big batches of stock and store it in small containers in the freezer. By adding it to soups and sauces, it adds another layer of delicious flavor.

When making Nannu’s Sicilian Escarole soup, your choice of cheese is very important. When people think of adding cheese to an Italian soup or pasta, they tend to think of Parmesan. In this recipe, the best cheese choice is Pecorino Romano. Pecorino Romano is a hard, salty Italian cheese made from sheep’s milk. Its used quite often in Sicilian and Southern Italian cooking. You can use it for grating and the flavor is a perfect compliment to this soup.

Next time you are looking for a quick, but satisfying lunch make a batch of Nannu’s Sicilian Escarole Soup. Eat it with some fresh crusty Italian bread and you will not be disappointed.

Nannu’s Sicilian Escarole Soup is a comfort food classic. It is a light soup made from escarole, chicken broth, onions and cheese.