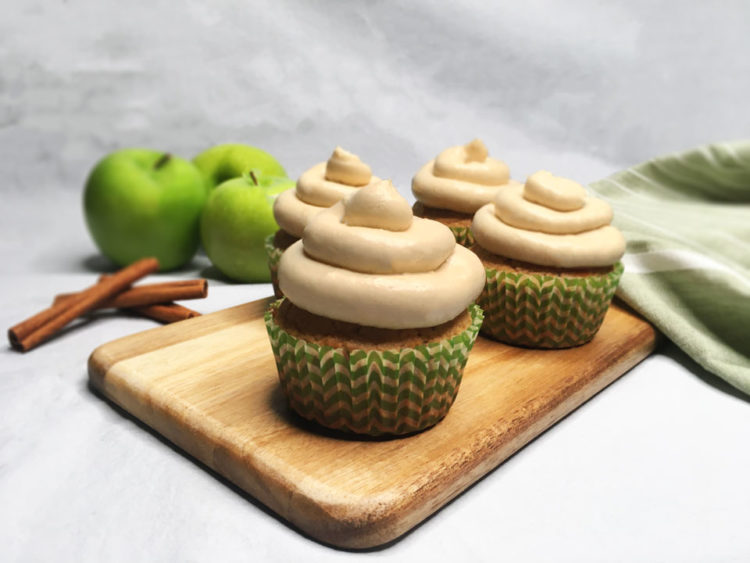 These cinnamon apple filled cupcakes topped with a maple swiss meringue buttercream encapsulate all the delicious flavors of fall in one yummy treat!

They take a few steps to make, but are totally worth it! The cupcakes are light and fluffy with just a hint of cinnamon. Then, they’re packed full with a tasty apple pie filling and frosted with a not-too-sweet, maple swiss meringue buttercream. The cupcake and apple filling are super easy to make. The maple swiss meringue buttercream takes a little more work, but nothing you can’t handle. (You’ll need a candy thermometer to make this frosting.) The final product is worth the little bit of extra effort.

I like to eat seasonally. Apples, cinnamon and maple syrup remind me of the fall season. I love maple syrup so much I could drink it by the glass! Be sure to use only real maple syrup (not maple flavored syrup) in this recipe. It adds a delicate sweet flavor to the swiss meringue buttercream.

There are lots of varieties of apples, but I like to use granny smith apples when baking. We always have them in the house whether to just eat them or bake with them. They are a very versatile apple that is tart, yet slightly sweet and holds its texture well when you bake them.

Perfect for entertaining or just eating

I made these cupcakes for a dinner party we were having. Everyone loved the combination of flavors and surprise apple filling hidden inside the cupcakes. They feel a little more elevated than your typical apple cake.

There were a few left over and I was sure to keep them for myself (and Joe)! They are best the day they’re made, but a day later they’re still yummy.

These cupcakes take a few steps, but are totally worth it! Enjoy all the delicious flavors of fall in one yummy treat!

Note: You will need a candy thermometer when making the swiss meringue buttercream.