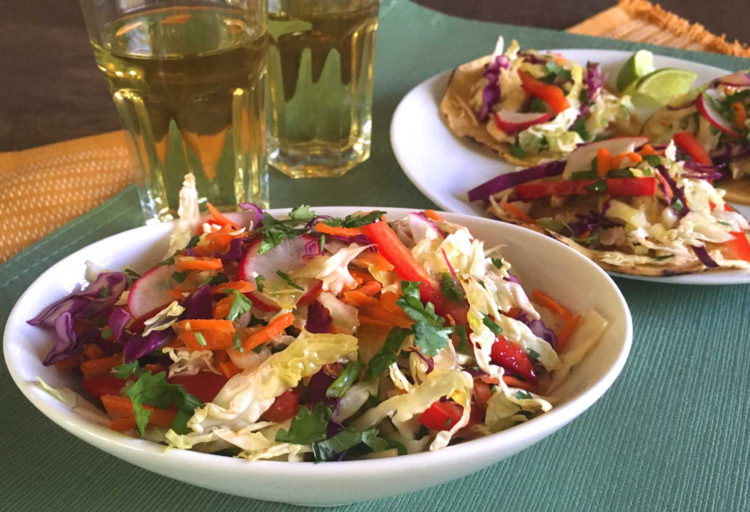 Margaret’s Light and Refreshing Slaw is packed full of crunchy vegetables, fresh cilantro, and a bright dressing of just lime juice and olive oil.  All the veggies give this slaw lots of different textures.  The cilantro adds a nice freshness.  If you don’t like cilantro, try another herb in this salad.  I have used basil before and it came out great.

You can use a package of coleslaw mix to replace the green and red cabbage and the carrots.  I usually have a couple kinds cabbage and carrots in the house so I just slice and shred them up.

Cabbage is an underrated vegetable

Cabbage is one of the most underrated and versatile vegetables on the planet.  As of late, I don’t think I have ever eaten more cabbage in my life!  Its one of those vegetables that is inexpensive and lasts for a long time, so I use it in many different ways.  I like to cook red cabbage with apples and serve it with homemade bratwurst patties.  Sometimes we cook green cabbage and mix it with Italian sausage and Fontina cheese and toss it into pasta.

Margaret’s Light and Refreshing Slaw goes with everything

I make this slaw a lot as it compliments all kinds of meat and seafood. It is great with our Mexican spiced rubbed steak inside a taco, on bbq sandwiches and so much more!  We serve this slaw at parties and our friends love it so much they ask me for the recipe.  I finally wrote it down so I don’t forget any of the ingredients.

Instead of vinegar you can get creative with citrus.  Citrus had to take the place of vinegar in everything I ate.  This is one of the recipes I came up up.  Years later, we still enjoy eating it.

You can use a bag of coleslaw mix to replace the green and red cabbage and the carrots.  I usually have cabbage and carrots in the house so I this is how I make it.